One of the offers as part of the Marylebone Food Festival was a Pasta Masterclass at La Cucina Caldesi. I had heard about them before, but I was hesitant to spend upwards of 100£ on a cooking class without knowing what to expect. So this 30 minute express class was a great way to check them out. 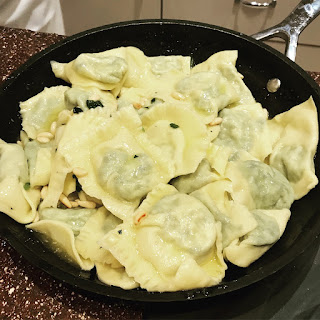 The cooking school is in a separate building from the restaurant (2 doors down). 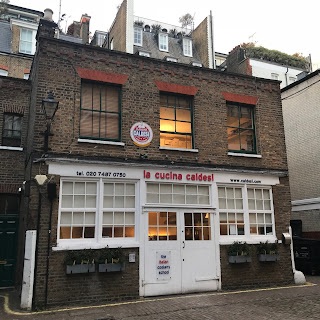 As I entered, I saw that it has a proper set up for classes. 2 long wooden tables for participants to work at and a long counter with induction cooking hobs. Since they specialise in Italian cooking and pasta and pizza which need cool surfaces to work on, this is a perfect set up. 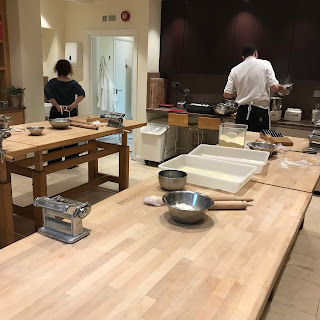 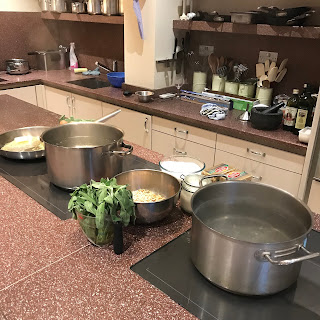 Our tutor for the evening was Chef Stefano Borella. He greeted us as we walked in. They have a large closet in the adjoining room, to drop bags and hang coats on hangers, before scrubbing up, putting on an apron and getting set to begin. 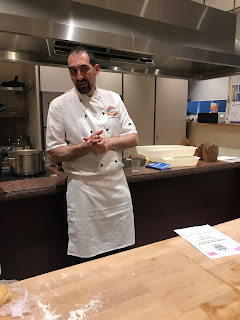 Given that this was an express class, the dough and filling had already been prepped, but after Chef Stefano demonstrated the technique, we all got to try our hands on the pasta rolling machines, and to stuff and make our own ravioli. 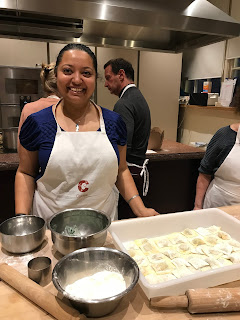 Once we were all done, our raviolis went into a large pot of boiling salted water. The sage was warmed in melted butter and the cooked ravioli was tossed around in this sauce. This was then garnished with toasted pine nuts. We all got to try a few pieces of the ravioli sprinkled or smothered with grated parmesan cheese and I have to say that it was absolutely delicious. 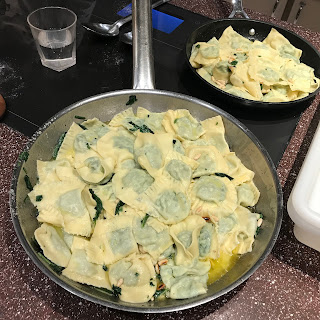 Since the servings were already in takeaway boxes, I carried half for my husband who was meeting me at Marble Arch for dinner. Given the weather, it had cooled down, by the time I met him. It was still tasty, but not half as good as it was when it was hot and fresh off the pan. It however, was good enough for him to tell me to go ahead and book a full day class with La Cucina Caldesi and to buy a pasta machine if I was serious about making fresh pasta at home.

Chef Stefano has a wonderful sense of humour and is very encouraging. If the other chefs who teach here are equally patient, I heartily recommend this cooking school even if you are a complete novice to the kitchen. They are helpful, non-threatening and make cooking a fun, relaxing endeavor, not a stressful one. About 20 of us did this class and were in and out within 30 minutes. Not once did we feel any kind of time pressure, nor did I feel rushed.

There was one participant who said that she was lactose intolerant. They got her some plain spinach filling without the ricotta and made a sauce with olive oil and sage for her. This was right on the spot. If you sign up for their other classes, they check for food allergies and intolerance at the time of sign up and prepare for that too.

They have their own series of cookbooks, each with a focus on a different region in Italy. These can be bought directly on their website: http://www.caldesi.com/caldesishop/cookery-books-1 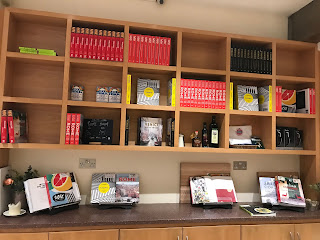 I absolutely loved the experience and I would love to go again for a whole day pasta masterclass.

As part of the Marylebone Food Festival, Hankies Marble Arch at the Montcalm offered a demonstration of two of the most popular items on their menu - the bhindi bhel and spinach roomali stuffed with spiced feta, roasted tomato and homemade garlic herb oil. 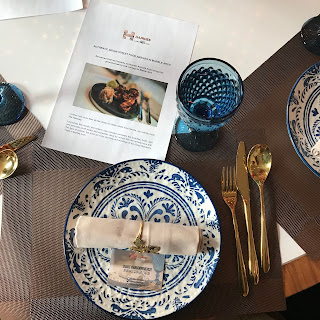 This was a much smaller group than the other events that I attended during the Marylebone Food Festival, so it was easier to keep an eye on and listen to Chef-Founder Anirudh Arora.

Hankies first opened as Hankies Cafe on Shaftesbury Avenue. I had ordered home delivery from this location and found the flavours quite authentic, despite their unusual twists. So I was quite excited at the chance to view the Chef in action. 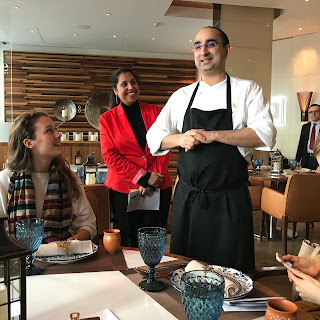 We were greeted by his wife Ishita as we entered the rather stylish looking restaurant. There is plenty of Indian work on display, from the stunning portrait at the entry to the beautiful crockery and glassware. All of it is very beautifully curated with an eye for detail without being in the least bit kitschy. 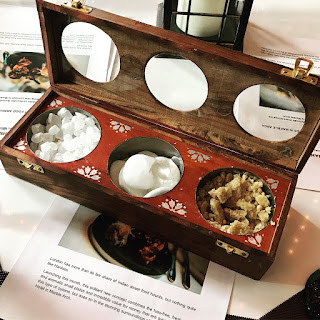 The name Hankies comes from the literal translation of their star dish - the Roomali/Rumali roti. Roomal in Hindi means a handkerchief. While the Chef's interpretation is that the name comes from the way that the bread is folded, I have heard another interpretation which says that the name comes from how thin the bread is - as fine as a linen handkerchief. No matter the etymology of the name, this is not an easy bread to make. Chef Anirudh said it took him a year of practice to be able to make this himself. I do not know of any households in India, that make roomali rotis at home. This is a bread best eaten at highway dhabhas or at restaurants that specialise in it. 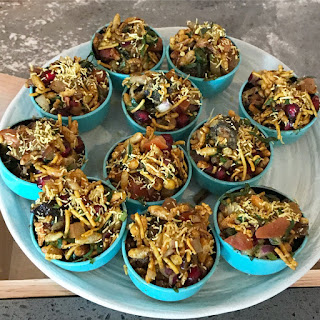 Bhel Puri is a standard street food in India. The ingredients and flavour profile vary across the length and breadth of India. It does however contain a few basic ingredients, no matter where you eat it. Its the proportion of each flavour that varies. The base is the puffed rice and deep fried gram flour (roasted and powdered chickpeas) noodles. To this is added freshly chopped onions, tomatoes, green chillies and corriander (personally, I love bits of boiled potato and leave out the tomatoes). The twist here is that they add spiced, fried okra/bhindi to this mix. 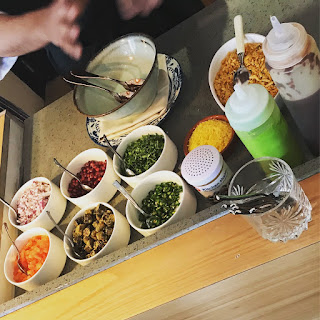 Then comes the tamarind sauce and the coriander + mint sauce. All tossed up and sprinkled over with chaat masala powder. A final garnish or fresh pomegranate and nylon sev. A crispy confection, just beginning to get a bit soft with the addition of the sauces and wet ingredients. The flavour is an explosion of salty, spicy, sour and sweet.

Since the puffed rice mix and the chaat masala can be bought from most Indian stores, this is an easy dish to make at home. 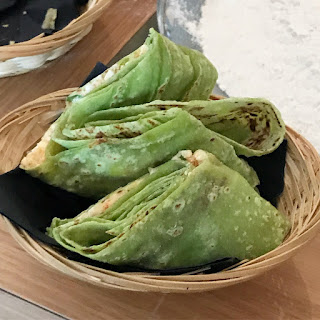 The roomali roti however, is a completely different ball game. At Hankies, they flavour the dough with a bit of spinach water to give it the lovely green colour. Its a joy to watch the chefs in action, and if you visit this location, you will always get to see it for yourself as they have a live counter for the roomali rotis in the dining area. 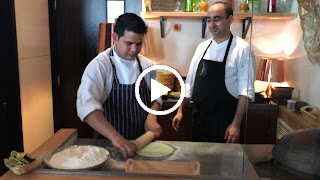 The stuffing is a unique twist, because feta cheese isn't native to India. However, the salty smoothness of the feta, pairs well with the roomali roti and the herbs and spices are beautifully balanced in this stuffing. One stuffed roomali roti is quite filling and I suspect that 2 of these with a side of dhal will be a full meal.

I loved the food and will return soon. We often have guests who want to eat at Indian restaurants and Hankies has now made it to my very short list of authentic Indian food in London.

As I have previously written, we absolutely love the food at Darjeeling Express in Kingly Court - Carnaby Street. It is one of our favourites for authentic flavours from the Hyderabadi and West Bengal styles of cuisine.

Asma runs an all woman kitchen, providing employment opportunities with single shift scheduling enabling women who otherwise would not be able to work due to time commitments.

Darjeeling Express is shut on Sundays, so the staff can spend time with their families, unless Asma runs one of her occasional biryani supperclubs. She now offers her kitchen and premises to other women who want to try running a supperclub out of a professional kitchen. What a wonderful, supportive way to encourage new entrepreneurs. And what a fantastic way for us customers to get to try new styles of cooking.

Our first supperclub experience (after 3 whole years of living in London) was Philippino Cuisine at Mae's - Pepe's Kitchen. I'm now constantly on the lookout for supper clubs that offer authentic homestyle cooking, especially those cuisines that are under represented in the restaurant arena.

Wincie Wong's Burmese Supper club on Mothers Day, was a fantastic fit to what I was looking for. She promised to cook some of her Mothers favourite dishes for the day. What a wonderful way to honour, remember and celebrate her memory. 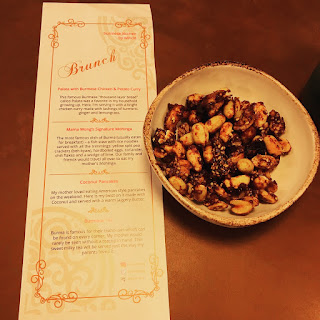 When we arrived, there was a bowl of Burmese spiced nuts awaiting us on the table, made by Wincie herself. So moreish, we could not stop eating them until the bowl was wiped clean. Being in public, we restrained ourselves, from the next step. 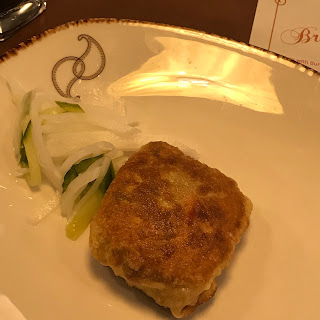 The first course was Palata with Burmese Chicken & Potato Curry - the famous Burmese "thousand layer bread" called Palata was a favourite in her household growing up. It was served with a bright chicken curry made with flavours of turmeric, ginger and lemongrass. This dish was a cross between a paratha and a samosa. As much stuffing as a nice plump samosa, but the dough was more like a paratha. I'd say the closest I have come to something like this in Indian cusisine is the Hyderabadi lukmi. 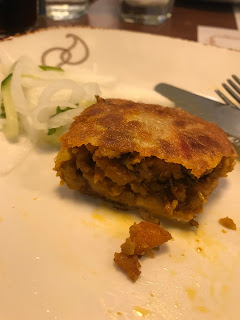 It was served with a side of pickled radish/mooli and cucumber. The sweet tartness of the pickles and their crisp texture, was a wonderful contrast to the fried palatas. 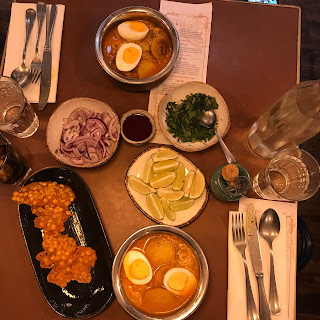 The main dish was the Mohinga. One of the most famous dishes of Burma, usually eaten for breakfast, surprisingly it is not as well known as khao suey outside of Burma. Mohinga is a fish (fish balls actually) stew with rice noodles served with all the trimmings: yellow split pea crackers (beh kyaw), hardboiled eggs, coriander, chili flakes and a wedge of lime. Each diner, mixes their choice of toppings on the noodles and stew. Then you can either mix it all up so that the flavours mingle and diffuse, or sprinkle a little at a time on each spoon. 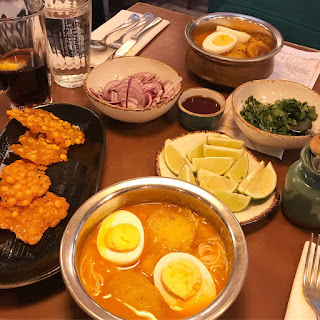 The soup was coconut based, but very light - more soupy than curry. We obviously added a generous amount of chilli, lime and coriander for a powerful kick. The chopped red onions were a good touch too.

Dessert was Coconut Pancakes. I was expecting Asian style thin pancakes, but Wincie's mother (who relocated from Burma to USA) loved eating American style pancakes on the weekend. Wincie's twist on it was Coconut pancakes, served with a warm Jaggery Butter and blueberry (her mothers favourite fruit) compote. 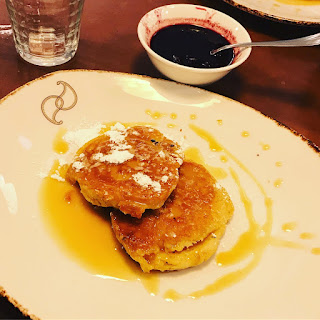 I'm not a fan of the thick American pancakes, I prefer crepes, but these were the right size, the baking soda wasn't over powering and the jaggery in the butter and the compote was absolutely delicious.

This was followed by milky Burmese tea. I don't drink milk with tea, but the husband quite enjoyed this at the end of his meal. 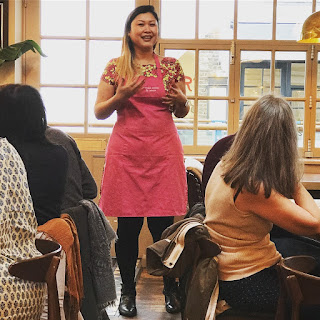 I know that she catered for a vegetarian on the table next to ours. Just check with her, if you have any dietary requirements before booking. She responds very quickly.

There was no shrimp in this menu, but Wincie assured me that she could substitute shrimp or skip it in her 25th March supperclub. Something else came up, so I could not book that supperclub. I do however look forward to her next one.